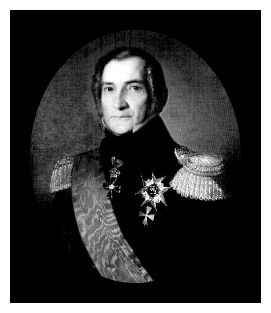 Gyllenhaal, Lars Herman, born March 20, 1790 at Hðrlingstorp, N. Ving (Skaraborg), died there December 22, 1858. Parents: estate owner Lars Herman Gyllenhaal and Baroness Hedvig Margareta Leuhusen. Enrolled in Uppsala University December 12, 1802, secretary in the Linnaeus Institute in Uppsala 1806, civil service officer exam June 10, 1808, court of appeal officer exam December 2, 1808, acting clerk in the judicial review department [preparing cases for a higher court] June 6, 1809, auditor [one who hears cases, but does not participate in the decisions regarding them; a trainee position] in the G—ta provincial court December 1, 1809, vice district judge December 3, 1812, auditor in the Svea provincial court March 26, 1813, district judge May 28, 1813, took part in parliament, first acting for his father, after his death in 1830 as the head of the family 1815 - 1851 (chairman of the House of Nobles in the 1850 - 51 parliamentary year), name, honor and dignity November 11, 1817, associate judge of appeal in the Svea court of appeal May 26, 1820, pro tem secretary of the judicial review department 1823, chamberlain November 27, 1826, accountant with KMO [His Royal Majesty's Order, the Order of the Seraphim] the same day until November 26, 1832, chairman of the board of Stockholm city fire insurance department 1827, administrator of the king's properties in the south and west of Sweden 1827, chief judge in Vðsternorrland's legal district court January 16, 1828 [one of them], marshal of the court July 1832, chief justice, "president," in the G—ta court of appeal April 23, 1836, one of the kingdom's Lords January 5, 1843, state minister of justice the same date until December 28, 1844, baron February 6, 1843 (introduced into the House of Nobles June 5, 1844), again chief justice in the G—ta court of appeal December 28, 1844 - April 3, 1855. HedLLA 43 [Honorary Member of the Agriculture Academy 1843] RoKKMO 51 [Knight and Commander of His Royal Majesty's Order 1851].

In his first year as a student at Uppsala, Gyllenhaal was taken under the wing of his vðstg—ta compatriot, the botanist Adam Afzelius, who belonged to the founders of the Linnaeus institute. Its purpose was to preserve the memory of Linnaeus and to seek to breathe new life into his science. In this society Gyllenhaal was at one time secretary. Gyllenhaal completed his exam studies with full energy, but managed in addition to play flute in the academy orchestra, to obtain for himself a comprehensive book-learning -- when the Uppsala reading society was newly founded in 1806 he was one of the 76 members -- and to become "corps master" [captain, champion] in the most popular student athletic event of the time, a sort of baseball. During summer vacations he undertook, with other like-minded people, botanical excursions into Vðsterg—tland and adjacent regions. He kept meticulous journals of his trips, and the botanical notations he makes there indicate a respectable knowledge of the subject.

At the age of 30 Gyllenhaal became assessor in the Svea court of appeal. In the years that followed, he received appointment to diverse kinds of community and state positions of trust. Claims were made on his capacity for work by the church councils of the Jakob and Johannes parishes, the city of Stockholm's savings bank, and its fire insurance office. He was appointed secretary of the judicial review department, and was chosen as a member of the civil state's pension organization. With Karl XIV Johan, the name Gyllenhaal had a good ring to it. He was named a chamberlain and appointed in 1827 as "administrator of His Majesty the King's properties in the southern and western sections of the kingdom," a position which required many hours of work, much tact, and the ability to withstand the king's outbreaks of temper.

His time as a chief judge in Vðsternorrland was a happy period in Gyllenhaal's life. He felt out of place in Stockholm, but appreciated the Norrland landscape's barren beauty, and looked forward to his summer highway journeys and legal councils in Norrland's towns. These were held once a year in Gðvle, Hudiksvall or S—derhamn, as well as Sundsvall or østersund. His travel journals from the summers of 1828 and 1829 are rich with worthwhile topographical and botanical notes. His interest in people, open nature, straight-laced character and personal likeability earned him many true friends, and the loss was great when he left Norrland. In connection with his trips he took excursions to, among other places, éreskutan [mountain] and the éngerman river. When in his later days he traveled to Germany, he became disappointed in the districts he knew so well from literature. Nothing could compare with the valleys of éngermanland and the land around Ljusnan [river]. In the Afton-Tidning [Evening Newspaper] in 1835, there is an anonymous article under the title of "Highway Observations in Northwestern Scandinavia." The author describes nature and people in Vðsternorrland's legal district, Dalarna and Trondhjem. He inserts original reflections upon the norse people's character and their union. There is much that indicates that Gyllenhaal is here describing one of his trips. 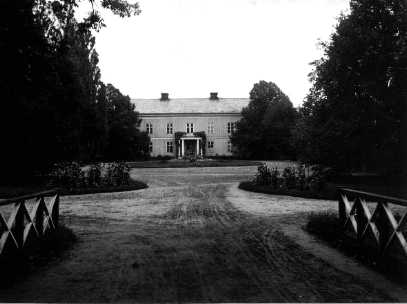 In 1830 Gyllenhaal, at his father's death and after having bought out his siblings, had become the owner of Hðrlingstorp, a widespread estate complex not far from Skara [see photo above, late 19th century]. His promotion to court of appeal chief justice in J—nk—ping made it possible for him to himself oversee his property, and to stay there with his family in the summers and at Christmas time. Gyllenhaal followed in his father's footsteps, and became an interested and successful agriculturist. "His Excellency is certainly his excellency, but in still higher degree he is a flower- and swine-master, and all who visit Hðrlingstorp must first inspect the dahlias and then the swine," writes Adolf Hamilton to Agnes Geijer in 1844. Gyllenhaal himself in his letters seldom neglects to inform the recipient about the realities of the world of agriculture.

Gyllenhaal was an ordinary chief justice. Louis de Geer, who was his subordinate and became his successor, describes him as the friendliest boss one could imagine. In his letter to Sparre one sees how the chief justice sought to excuse certain negligent court of appeal employees, and rescue them from dismissal. He purchased a house-property in the Stora [literally "Great"] marketplace in J—nk—ping, and practised there a legendary hospitality. As manager of SmÍland's Private Bank and the master chairman for 21 years in the Freemason's Lodge of the Central pillar, he got to know the greater part of the province's upper-class people, and brought them together at huge parties in the autumn and spring. The chief justice's salary -- 5,000 riksdaler banko -- was not enough, but Gyllenhaal was a skillful businessman. Besides this, his second wife was wealthy and Hðrlingstorp's produce was satisfactory. His economy remained good in spite of large losses on bail bonds.

Since 1817 Gyllenhaal had taken part fairly diligently in the work of parliament. He was however no leader figure, and did not pursue any leadership functions. In 1840 he was offered a place in the Cabinet, but succeeded in defending himself. When the offer was renewed in 1843, he found himself compelled to give in to the will of the king, and shouldered the burden under protest. He saw the undertaking as a temporary thing, which was given clear expression in his requirement that the position of chief justice which he was leaving should remain vacant. In his political thinking he was clearly conservative, but he had avoided engaging in partisan struggles. This circumstance plus his personal qualities made it so that during his time as a Cabinet minister he was treated leniently by the opposition. At his 25-year jubilee as regent, Karl Johan elevated him to the baronial class. In Uppsala, however, Gyllenhaal did meet with mistrust, when he traveled there to supervise the behavior of the young people at the northern students' fraternity festival in 1843. With Karl Johan's death, Gyllenhaal had hoped "to escape from the disagreeable Cabinet." The fact that he remained until the end of the year surely depended to a certain extent upon his being commissioned to help set in order the royal estate. "Praise be to God" he writes in his diary, when on December 28 he received dismissal from his Cabinet office and once again was appointed chief justice of the G—ta court of appeal.

For close to five years Gyllenhaal was now able to live in peace and quiet. After the March disturbances in 1848, in order to calm the opposition Oscar I set forth what was for the time a radical proposal for representation reform. When the storm subsided, the king repented and wanted to see the proposition rejected by the parliament that was going to convene in the fall of 1850. For the leader of the negotiations in the House of Nobles, he felt he needed a reliable man of conservative disposition. The invitation to be chairman of the House of Nobles went by way of the state minister of justice to Gyllenhaal, who in appealing terms begged to be excused. His eyes were weak and he had difficulty reading by candlelight; his speech was slurred, as he had lost all his teeth but one; he loved the peace of family life. Now he was faced with the prospect of being forced to sacrifice his household tranquility and go to encounter a time filled with anxiety, discomfort and expense. The argument was not accepted, and after further correspondence Gyllenhaal resigned himself: "I commend myself into God's hand and obey my revered and beloved king's will." When the king in the speech from the throne at the ceremonial opening of parliament had announced his proposal for representation reform, the chairman of the House of Nobles stepped forward, and to the mortification of the opposition press delivered an oration, in which he praised the kingdom's class-structure as an institution. Despite his apprehensions, Gyllenhaal fulfilled his commission to everyone's satisfaction. The proposition was defeated and at the close of parliament in September 1851 he was decorated in the Serafimer order [Sweden's highest order of knighthood].

At the age of 65 Gyllenhaal retired from the chief justice office. After about a year he sold the house-property in J—nk—ping and lived at Hðrlingstorp year-round. He was outside Scandinavia for the first time when in the summer of 1858 he traveled to Karlsbad to drink the mineral waters for a stomach complaint. He has communicated his impressions from the trip in letters to his wife. He was impressed neither by the palace in Prague nor by the Rhine "with its gray, muddy clay-water, its monotonous tiresome grape-growing hills." Sweden was the most beautiful. He died of a liver ailment four months after returning home.