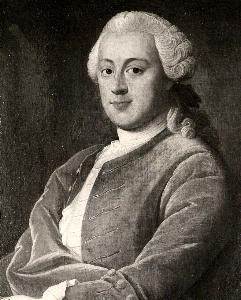 Gyllenhaal was registered in Skara school in 1762. He was there at the same time as the brothers Adam and Johan Afzelius, and J. H. Kellgren. A LinnÈan-colored interest in natural history during his upper-school years found expression with him in excursions and systematically stored collections of objects from nature. His notes in this connection bear witness to sharp observation and thorough knowledge. He shared this interest in collecting with his father and his brother Leonard. With the former, who devoted himself to statues and books -- above all academic dissertations -- this became something of an obsession. At Lund University Gyllenhaal studied chiefly jurisprudence. Under professor Lars Colling's chairmanship, he defended in 1768 a treatise written by himself about mining courts, De Judiciis Metallicis. The following spring term, he continued his studies at Uppsala. During his time at Lund Gyllenhaal had corresponded with the expert in the science of mining and governor Daniel Tilas, and this acquaintance with him facilitated his acceptance as an assistant surveyor in the college of mines. In a letter of recommendation to Torbern Bergman, Tilas says he has "every reason to expect much good" of Gyllenhaal. In the years 1769 and 1770 Gyllenhaal seems to have received private instruction from Linnaeus and Bergman. Certainly he himself had some valuable experience to impart to his teachers. Linnaeus, in alluding to Gyllenhaal's knowledge of geology, is said to have remarked that "he could see all the way down to seven fathoms in the earth." In a letter to S. G. Hermelin in 1773, Gyllenhaal tells about his dealings with Bergman. In January 1773 he had left with the latter an essay with the title "An attempt from the present nature of the ancient crust of the earth to reach a conclusion about the course of its formation." Bergman used Gyllenhaal's theories set forth here in the second edition of Verlds-beskrifning [Description of the World] -- without acknowledging the source. At a meeting he treated the author coldly, and said that he had mislaid the essay. Gyllenhaal makes bitter comments, and points out that he has Tilas to thank for his knowledge of geology. In that area Bergman had nothing to give.

In 1769 Gyllenhaal, together with among others the brothers Afzelius, Anders Dahl and Olof Knˆs, had taken the initiative for a topographical society in Skara. The association's purpose was foremost to collect material for a natural- and cultural-historical description of the V‰stergˆtland home region. To that end, Gyllenhaal and his brother Leonard undertook extensive trips in the home province. These resulted in Beskrifning ˆver Skaraborgs l‰n [A Description of Skaraborg Province], a manuscript in three quarto volumes. The title is misleading, since even parts of ƒlvsborg province are discussed. Widely different things, dialects, mortality, the peasantry's superstitions and the province's geology are described under 138 headings. In his treatise about the formation of Swedish soil, Gˆran Wahlenberg refers to the measurements of Mˆsseberg's stratified rocks of which Gyllenhaal here gives an account.

Even the geology of the Uppsala district caught Gyllenhaal's interest. He relates his experiences in Anm‰rkningar ˆfver havsl‰mningar vid Upsala [Notes on remnants from the sea in Uppsala]. We learn that in Polacksbacken's sand he found the snail -- Litorina litorea -- which gave its name to the Baltic of the warm period [the Baltic during a certain geological age is known as litorina havet, "the Litorine Sea"]. In 1774 by commission from the college of mines and the Office of the Iron Industry, Gyllenhaal investigated the possibility of finding coal in the Silurian strata of N‰rke and ÷stergˆtland. He gives an account of the result in a manuscript on May 8, 1775, Systematiskt sammandrag af de anm‰rkningar som ... gordes under en resa i N‰rke och ÷stergˆtland 1774 [Systematic summary of the notes that ... were made during a trip in N‰rke and ÷stergˆtland in 1774]. The author occupies himself almost exclusively with a detail-rich description of the provinces' geology. One passage suggests that he was the first to describe the so-called Visingsˆgruppen [Visings island group, in the middle of Lake V‰ttern] as a separate formation from the ordinary Cambrosilurian structures. The work was in its time well-known, and was used in professional circles. Even by the modern standard of knowledge of the subject, it is highly valued. The observations which Gyllenhaal gives an account of here and in Hafsl‰mningar [Remnants from the sea] place him as one of the Swedish pioneers in Quaternary geology. The country's geologists had until that time devoted their labors to the solid mountains, which could yield valuable metals. Loose rocks had been regarded as a disordered and accidental combination under the heading "remnants from the Flood," and the effort to throw scientific light on them was seen as meaningless. Bergman, Hermelin and Gyllenhaal by means of their research and conclusions laid the groundwork for that science, which in Sweden had eminent spokesmen.

In 1775, Gyllenhaal was called a geschworner [second in command to a mine-inspector], and we know that he was at that time under contract for geschworner work at Sˆdermanland and ÷stgˆta mines. He chose the more lucrative offer to be the director of ≈tvidaberg's copperworks. It had a long legacy of abandonment when the operation was resumed around 1760. The rapidly increasing profitability during Gyllenhaal's time as director -- 100% increase in copper production -- indicates that he was a good economist and leader in enterprise. The German doctor Isaak Gr¸no, who visited ≈tvidaberg in 1779, predicts in a letter to Torbern Bergman that ≈tvidaberg in the future, thanks to its energetic mine-inspector, will come to surpass all Swedish mines. Gyllenhaal now had little spare time for science, for which he expressed regret in a letter in 1776 to his friend J. G. Gahn. In a letter in 1783 to the owner of ≈tvidaberg, the councillor in the war office J. Adelsw‰rd, the president of the college of mines Nils Bielke proposed that Gyllenhaal should be freed from his daily routine in order to be able to devote himself to science. The chief mine inspector in Finland, A. Nordenskiˆld, in 1785 requested of His Royal Majesty that Gyllenhaal, "one of this kingdom's most knowledgeable mining men," should be allotted 200 riksdaler for the investigation of Finland's bedrock. The allotment was granted, but Gyllenhaal never got to any investigations. He remained loyal to the copperworks until his death. During his years at ≈tvidaberg, Gyllenhaal amassed a considerable fortune, and placed capital in, among other things, houses and lots on St. Erik's square in Uppsala. In 1785, with the brothers Afzelius organizing the work, Gyllenhaal had a house completely restored, which was afterwards donated to the local Science Society. After Gyllenhaal's death the society received his library and nature collections, and in addition 3,000 riksdaler to be used for the upkeep of the property and collections. The latter were deposited in 1858 in various university institutions, and are now difficult to identify.

The Physiographic Society in Lund on the initiative of A. J. Retzius invited Gyllenhaal to be a member. He was elected a research associate in the Academy of Science in 1769. He was nominated as a member in 1780 and 1787, but did not receive the necessary number of votes. In the Academy of Science's proceedings was printed Gyllenhaal's treatise about the Cystoidea, a fossil of the Echinodermata group. It is of high quality, and demonstrates his scholarly talent. Beyond this, he never got to see any of the results of his research published. Gyllenhaal's style is concise and pregnant, and as far as that is concerned one can with good reason call him a disciple of Linnaeus. In an obituary testimony, Gjˆrwell praises his "fine insights into the Swedish language and history." In a libelous pamphlet which exists in the Royal Library -- Grafskrift ˆfver bergm‰stare Gyllenhaal [Epitaph over Mine-Inspector Gyllenhaal] -- he is likened to Rehoboam and hard words are spoken about his unsparing methods with his subordinates. Excerpts in the documents Gyllenhaal left behind indicate that he was interested in Emanuel Swedenborg's doctrine, and he supported financially his brother's publication of his writings.