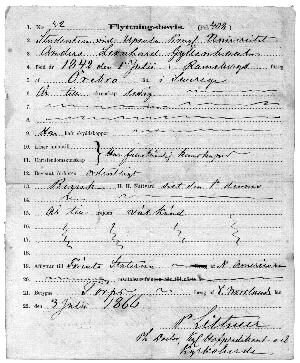 Anders Leonard Gyllenhaal, the patriarch of the American branch of the Gyllenhaal family, emigrated from Sweden to the U.S.A. in 1866, at the age of twenty-four. His Flyttningsbevis, or exit permit, has survived intact and is now in the possession of his great-grandson Ed Gyllenhaal.

The Flyttningsbevis is the Grail of the family historian who is researching an immigrant ancestor from Sweden. The importance of this document has been summarized by Nils William Olsson:

"This is the official exit permit, issued by the pastor of the parish in Sweden from which the immigrant came. It is an important document, since technically no Swede could leave his home parish without this permit. It gives the full name of the person, his date of birth, his place of birth, character reference, his knowledge of the Catechism and the Bible, probably the name of the parish to which he moved, or if he came directly to America, the destination is given as merely Norra Amerika, since many did not know precisely where they were going. This type of document is extremely useful in providing the pertinent information from which to proceed directly to Sweden. Unfortunately many of these documents have been lost through the years, particularly at times of settling estates, when the documents, written in Swedish, often were destroyed." (Tracing Your Swedish Ancestry. Uppsala: Ministry for Foreign Affairs, 1987)

The contents of Anders Gyllenhaal's Flyttningsbevis appear in translation below. Italics indicate the portions of the form that were handwritten in ink. Selected phrases in Swedish have been transcribed and appear in quotes between parentheses.

2. Student of the Royal University of Upsala

5. in the county of Örebro, in Sweden

9. He has had the vaccination against smallpox ("Har haft skyddskoppor").

10. He is able to read from the book ("Läser innantill") and has full knowledge ("fullständig kunskap") of that

11. and of the Christian creed ("Christendomskunskap").

12. He has visited the parish catechetical meetings in an orderly manner ("Bevistat förhören ordentligt")

15. He is known to be of good reputation ("Är till frejden väl känd")

19. Moving to the United States, in North America

21. Certified in the parish ("förs:g", i.e. församling) of Torp in the County of Västernorrland ("V. Norrlands")